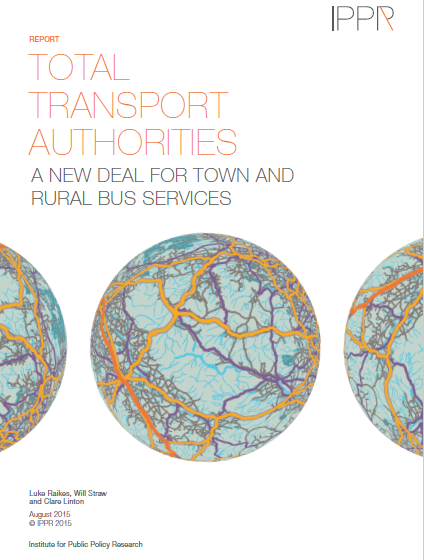 Summary: This report makes the case for creating ‘total transport areas’ spanning multiple local authority geographies, which should take charge of all transport-related funding and regulatory powers in order to sustain and improve vital bus services in our towns and rural areas.

London’s bus services have been thriving for a decade and a half: there are now more passenger journeys in the capital than in the rest of England combined. Other major cities are learning lessons from London’s success: Greater Manchester is taking on regulatory powers in its devolution deal; Nexus, Tyne and Wear’s passenger transport executive, is applying for the legal power to regulate its local bus routes.

Elsewhere, however – particularly in towns and rural areas – bus services have been decimated by a vicious cycle of falling patronage, rising fares and cuts to services, a process exacerbated by severe cuts to both local authority budgets and subsidies for bus companies. This has left many people isolated – particularly those without a car, which includes large numbers of young people, pensioners, disabled people, and those on low incomes or who are out of work.

It recommends building on the government’s successful ‘total transport’ pilots, which support initiatives that take a ‘cross-sector approach to the delivery of supported public road passenger transport services’, and which go with the grain of moves to devolve greater powers to city- and county-regions. It also provides an overview of successful initiatives from across the country that have taken important steps towards a ‘total transport’ approach to bus services.

Most importantly, it recommends the creation of ‘total transport authorities’ (TTAs) in travel-to-work areas which span multiple local authority geographies. These new bodies should take charge of all transport-related funding and regulatory powers, and encourage the delivery of bus services by a much wider range of providers, including social enterprises, community investment companies and municipal companies. By first focusing on pooling services already provided by local authorities, and in time taking on responsibility for public transport provided by other public bodies such as hospitals, GPs, further education colleges and higher education institutions, TTAs would promote social justice by improving bus services for thousands of people in isolated communities, and reduce carbon emissions by providing a viable alternative to car travel.