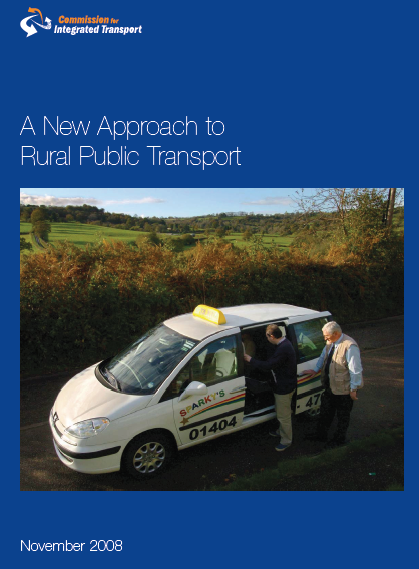 Produced by the Commission for Integrated Transport (CfIT) (November 2008)

Public transport has enjoyed a renaissance in many urban areas in recent years, but
outside large towns and cities its quality remains patchy. Many rural communities have
public transport services that are infrequent, finish early in the evening and do not run at
all at weekends. Connections between buses and trains are erratic, and examples of
integrated ticketing are the exception rather than the rule.

This problem affects large numbers of people – a fifth of the English population (9.5 million
people) live in rural areas. It causes significant hardship, with the evidence suggesting
that low-income rural households are often forced into buying and running a car when
they cannot really afford to do so. Rising fuel prices make it even more important to offer
a better alternative to car use for these rural households.

But the problems caused by poor rural public transport are wider than this. Lack of
a decent transport service undermines the economies of rural areas, since it is more
difficult for people to access jobs and services. It also has environmental consequences,
resulting in high levels of car use compared to urban areas, and greater per capita
carbon emissions from transport.

As an advisory body to Government (until it was abolished on 14 October 2010) the Commission for Integrated Transport (CfIT) examined how innovative transport schemes, using shared taxis,
might be developed on a large scale to meet rural accessibility needs. In doing this, they
have looked at examples from the UK and abroad, including mainland Europe, where schemes operating on a large scale, could be adopted in the UK.

The evidence from these schemes suggested that it should be possible to achieve significant economies of scale, so that it would be possible to develop a rural transport network that is more cost-efficient and environmentally-efficient than the current system, and better meets rural people’s needs.

It was found that the European schemes generally require less subsidy, as a
proportion of total costs, than the UK schemes – an unusual situation, since it is more
common for European public transport to receive higher subsidies than public transport
in the UK. This suggests that there are clear opportunities to make current expenditure
on rural public transport ‘work harder’, so as to deliver a better service.

Termed as ‘TaxiPlus’ it was seen as a way to meet the challenges laid down by the Government in towards a “Sustainable Transport System”, CfIT recommended a large-scale demonstration TaxiPlus
scheme as the next step. It did not believe that there are any insurmountable regulatory or legislative problems that would prevent developing these schemes, though there are some specific
issues in relation to taxi licensing and the funding system for rural transport that will
need to be resolved. 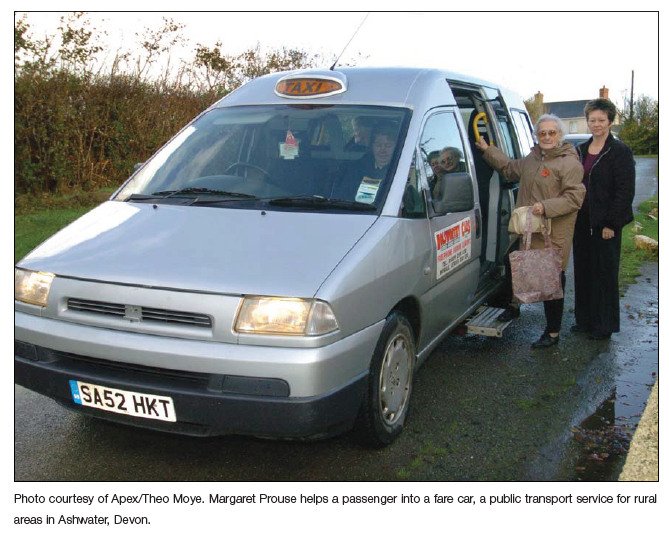 CfIT believed the UK would benefit from demand-responsive transport schemes similar to
those that have developed in the Netherlands and Switzerland. Their research has shown
that these regional and national operations have lower subsidy costs per trip than the
more locally-organised schemes currently operating in the UK. It was believed that the
economies of scale benefits achieved in these countries could also be achieved in the UK.

The types of schemes operating in the Netherlands and Switzerland typically use a fleet
of small vehicles to provide shared transport to passengers who pre-book. In some
cases, the service operates on a fixed route and at a fixed time but in a location or at
a time of day when conventional bus services would not be viable. In other cases, the
service is door-to-door. Pre-booking can generally be made up to an hour before travel.
Hours of operation are commonly from early in the morning until late in the evening,
seven days a week. Ticketing is integrated with conventional public transport, and
services are designed to connect with buses and trains.

Whilst they operate within a national framework, the Dutch and Swiss schemes are
generally managed at a regional or sub-regional level. For example, the licensing system
for providers of what is known as ‘small-scale collective transport’ in the Netherlands
is national, so that providers need only register once in order to be able to operate
anywhere in the country. A single provider operates a small number of call centres
that take bookings from passengers anywhere in the country. Contracts for small-scale
collective transport services are then let by the various provincial administrations.
Within the UK, the Government’s Local Transport Bill sets out a framework for sub-
regional co-ordination of transport planning that may in future make it easier to manage
demand-responsive transport services on a regional or sub-regional scale – for example
across several counties. This would help achieve the economies of scale shown by the
mainland European.

However, there are some barriers to the expansion of demand-responsive services that
need to be resolved. First, there is reluctance on the part of local authorities and the taxi
trade to take full advantage of the opportunities that are available under current legislation.

Second, taxi and private hire vehicle (PHV) licensing outside London is the responsibility
of district and unitary councils. This is seen as working against the development of large
firms with the capacity to run sizable operations of the type seen in mainland Europe.
The law on out-of-area operation by taxis and PHVs is both complex and controversial.

Case law has established, for example, that a PHV can accept a booking entirely
outside the area in which it is licensed provided that the driver, vehicle and operator’s
licence have all been issued by the same authority. However, the basis of the licensing
system – and the way that the industry in general sees itself – is one of locally based
regulation and operation within a defined local area. There is also the argument that
district level licensing divorces this function from the wider considerations that are the
responsibility of local transport authorities.

Third, certain streams of public subsidy (eg Bus Service Operators’ Grant, (BSOG)) have
a distorting effect on the economics of certain types of demand-responsive transport
schemes provided by commercial taxi firms (who are ineligible for BSOG). If demand-
responsive transport schemes as seen in the Netherlands example are to become a
bigger part of the picture in this country in future, it will be necessary to have a consistent
approach to subsidy for all forms of public transport. 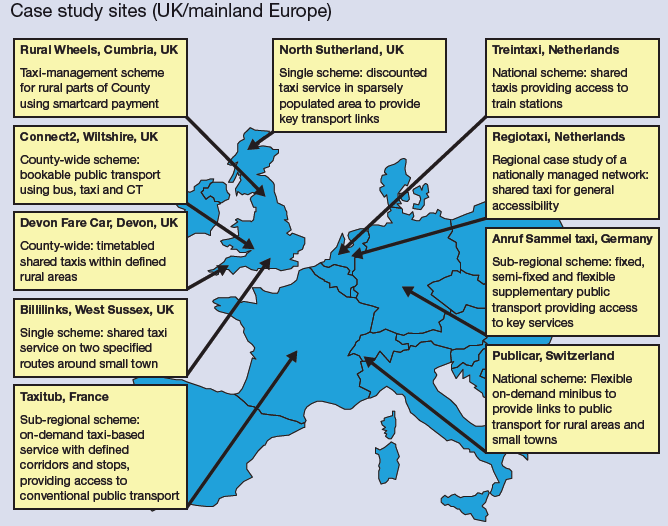